From the moment he arrived in Oklahoma this summer, everyone could see that Adrian Peterson was different. And speaking of different, isn't it about time to hand the Heisman to a freshman? We would if we could, but SIOC will just have to settle for naming Peterson our male athlete of the fall 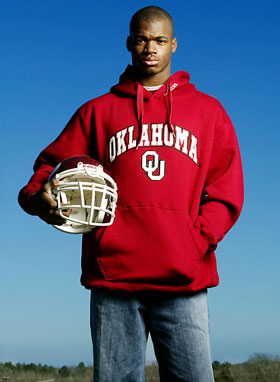 Poor Adrian Peterson. You would've thought he'd made a name for himself. Thirty-six consecutive 100-yard games. NCAA Division I record holder for rushing yards as a freshman (1,932). College football's alltime leading rusher. And yet, just three years after finishing his career at I-AA Georgia Southern, he appears destined to be remembered as the second-greatest Adrian Peterson ever to play college football. But he's not bitter.

"I hope he has great success," says the elder Peterson, now a backup running back for the Chicago Bears, of his namesake, a freshman tailback at Oklahoma. "I think meeting him would be a straight-up thing to do."

It is a testament to his prodigious and precocious talent that after only 11 games, Adrian Peterson has eclipsed Adrian Peterson. While his classmates in Norman struggle with the Freshman 15, Peterson has surpassed the Freshman 1,500. He has rushed for 1,671 yards (151.9 per game) and delivered his best efforts in the Sooners' toughest trials: 225 yards in OU's 12-0 defeat of then No. 5 Texas in the Red River Shootout; 249 in a harrowing 38-35 victory over Oklahoma State in Stillwater. Two Saturdays ago against an overwhelmed Baylor defense, Peterson gained 132 yards -- in a 7:26 stretch to open the second half. For the game, he rushed for 240.

"I don't know if Peterson is going to win the Heisman as a freshman," Baylor defensive end Khari Long said after that performance, "but he's going to win it sometime."

Peterson may just win it Sooner rather than later. His backfield mate, quarterback Jason White, the Heisman incumbent, has said that he'll vote for Peterson. So will others. "Spencer Tillman put it right," Sooners coaching legend Barry Switzer says of the former OU running back turned CBS analyst. "If [former Florida State quarterback] Chris Weinke could win it at 28, why can't a freshman?"

Should Peterson take home the Heisman on Dec. 11, he would become the first freshman to do so. (No sophomore has won either.) His legend would be secure. But the legend is also only a college freshman, so we asked others who have passed through Peterson's orbit -- be they friends, family members or fellow legends -- to tell us more about the BMOC they call A.D. (The initials stand for "all day," an appellation his dad coined in reference to his son's tireless capacity for playing football.)

"The Henderson game in 2003, he was held under a hundred yards," says Richard Scoggin, Peterson's principal at Palestine (Texas) High. "Had a 90-yarder called back. But he still was signing autographs for Henderson's cheerleaders, their fans. He was about to go when he spotted a little boy crying. He wheeled around to the boy. 'I think somebody needs an autograph,' he said."

"Adrian just loves brownies," says Peterson's aunt Ola Hall. "In high school we gave him $500, you know, to help him out. He told us he was gonna buy $500 worth of brownies."

"I'd been hearing about him for a couple of years, so I drove down from Dallas to see him play," says Sooners rushing legend Billy Sims, who won the Heisman as a junior in 1978. "Didn't make a big deal about it. Didn't tell nobody. What'd I think? He was a man among boys."

"There's one play, maybe you've seen the video," Scoggin says. "We're playing Huntsville. Adrian has a head of steam and hits the linebacker straight on. Knocks him back, but that's only part of it. He ran over him. Planted his foot on the poor kid's chest."

"I won the state championship in the 100 three years in a row," says Peterson's mom, Bonita Jackson, who once ran an 11.39 100 meters and who attended Houston on a track scholarship. "Adrian and I, we'd always race. Me, him and Brian [A.D.'s older brother, who was killed by a drunk driver in 1992 when he was eight] were just like the three little stooges."

"Adrian loves to run," says Lloyd Pinson, a cousin. "We all do. When he came home this summer, another cousin of his, Latimer Peterson, who's about 35, told Adrian, 'If you beat me, I'll give you $50.' That's easy money."

"In the process of recruiting Adrian, I knew that his dad was very influential," says Oklahoma wide receivers coach Darrell Wyatt. "I thought we should use our one off-campus visit to see his dad, so I said, 'Coach Stoops, we need to go visit his father.' 'Set that up,' he said." (Nelson Peterson, a former basketball player at Idaho State, is in the fifth year of a 10-year prison sentence at the Federal Correctional Institution in Texarkana, Texas, for money laundering in a drug case.)

"I knew that when it came time to talk about where he was going to go to college, he and his dad would keep it to themselves," Pinson says. "Adrian's real proud of his dad."

"When you get here, you're back to square one," says OU senior defensive end Dan Cody. "You gotta earn your way. And some of the things A.D. had said, well, he seemed pretty sure of himself. I thought, He's going to have to do some stuff to impress me. I was in his summer workout group, the 10 a.m. group. You know what? Most freshman don't last. A.D. was consistently leading our group. He was the most impressive guy I'd ever seen. When we did 200s out on the track? When his foot hit the ground? The earth moved."

"We're roommates, we're best friends, we're like brothers," says cornerback Marcus Walker, the Sooners' only other freshman starter. "Our room? We've got pictures of Halle Berry all over our walls. Adrian puts 'em up.

"He's a joker," Walker continues. "He'll have someone call, he'll hand me the phone and say, 'Marcus, it's a girl. She wants to talk to you.' It's one of his guy friends."

"During the game he's all business," says Oklahoma senior center Vince Carter. "And he punishes people. It's an honor to block for him."

"The key to his success?" Switzer says. "He's just faster than the guys who are chasing him."

"I tell people that my son is the first 28," says Charlotte Perkins, whose son Antonio, a senior cornerback for the Sooners, also wears that number. "Antonio don't mind. He respects A.D."

"We don't sell a 28 jersey," says Gary Madole, manager of the campus bookstore. "Nike decides what jerseys to make in the spring, and they only made a number 18 [Jason White] and a number 20 [Kejuan Jones, the junior tailback whose spot A.D. usurped]. Oh, and we have a [number 22] Marcus Dupree throwback jersey. Can you believe that?"

"Marcus Dupree was the most physically gifted back who ever came through here," Switzer says.

"From the highlights I've seen on ESPN, he looks like a great athlete," says Dupree, who as a freshman ran for 239 yards in the 1983 Fiesta Bowl. "I had my time, and now it's his time to shine."

"Oh, I've made up my mind who I'm voting for for the Heisman," Sims says. "I won't tell you, but you can guess who my top two are."

"Hey, I just phoned our Nike rep," says Madole, from the campus bookstore. "They're shipping us a bunch of 28 jerseys on Dec. 9."

Sooners' Peterson hard to pin down

Star-Telegram. Fish Not Out of Water: Palestine's Adrian Peterson wasn't a starter when Oklahoma's football season began. By December, he was in New York as the first freshman to finish second in Heisman Trophy voting.

Pride shines even behind prison walls

Ivan Maisel leaves Adrian Peterson off his All American list, and answers to it

Adrian Peterson named to the AP All American first team

Matt Leinart wins the Heisman, that's ok, OU will take it back during the Orange Bowl.
Adrian Peterson came in 2nd in the voting, Jason White 3rd.

Across the nation: One vote for  OU's Peterson

Peterson lives up to the hype

Regardless of age, Adrian Peterson should win the Heisman (CNNSI.com)

Geno names Adrian Peterson his player of the year (Heisman vote!)
Peterson transformed OU's offense into a two-dimensional attack. He might be a true freshman, but he runs like a fifth-year senior.

The Sporting News names Adrian Peterson this year's Top Freshman
Let fullback J.D. Runnels explain the difference between Oklahoma's offenses in 2003 and '04: "Sometimes, we'll run play-action (passes), and we don't even have to block anyone. Everybody is so worried about him." Him. That's tailback Adrian Peterson, Freshman of the Year. Almost 25 years ago, we were introduced to tailback Herschel Walker, who should have won the Heisman Trophy that season. Walker became arguably the greatest player in the game's history. Now Peterson is being compared to Walker and has just as much of a claim to the trophy as anyone. Only once this season did he fail to reach 100 rushing yards -- and he admittedly still doesn't fully comprehend where to run in OU's zone blocking schemes. Maybe once he figures it out, we can hand him the bronze trophy.

There's not guarantee Peterson plays all 4 years at OU

Adrian proves he deserves the Heisman

Adrian Peterson may have won the Heisman...