For Adrian Peterson football is easy

Peterson likes to run inside (NewsOK.com)

Can a freshman win the Heisman?

A fan's story from this weekend about Adrian Peterson:

"So we fly in from California to go to the homecoming game. As soon as I pull on campus I think I spot Adrian. I was going to take a picture from a far and low and behold he turns toward us in the parking lot. I ask if we can take a picture together and he couldnt be nicer.

We get one shot and my battery dies

I figure oh well thats it but our trip is made. He gets in his car to leave and as we start to wave he pulls up, rolls down his window, signs a Sports Illustrated that he has in the car and hands it to my 8 year old son

What a class act. We then catch him later at the staudium (this is on Friday) and he stops to take more pictures with us.....

"In the last two weeks, the Heisman race has become Oklahoma freshman tailback Adrian Peterson and everybody else. Purdue quarterback Kyle Orton fumbled away his shot. Cedric Benson came up small against the Sooners. Vernand Morency - while very, very good - doesn't look as good as Peterson. And the Southern Cal duo of Matt Leinart and Reggie Bush are both so good it's hard to give the award to one over the other. With Peterson averaging 167 rushing yards per game, it's his trophy to lose." Article

Mangino calls Adrian Peterson "the best freshman running back I've seen in 10-20 years.... He reminds you of a Bo Jackson or Herschel Walker." Article

"Oklahoma freshman running back Adrian Peterson is another player who may end up walking away with the Heisman. As a starting freshman running back for the number one team in the nation, Peterson has been racking up incredible numbers, and voters are taking notice. In six games Peterson has accumulated 901 yards and six touchdowns. If Peterson doesn't take home the award this year, look for him to be next season's early favorite." Article

Adrian Peterson runs for 130 yards on 36 carries vs. Kansas State

SI.com Heisman Watch, no clear cut 1, so he just lists 2 thru 6, and guess who is 2, AD baby
"White was the difference on Saturday against K-State, but A.D. is having the better season. He did post his sixth straight 100-yard game and play a big part in wearing down the Wildcats' D in the second half -- again, not "assume-the-throne" stuff, but this week, it'll do."

Dave Revsine: Adrian Peterson, RB, Oklahoma -- Has helped take the pressure off Jason White at Oklahoma. OU's offense is harder to defend than last year's version - which is saying something - and Peterson is the major reason why.

Rece Davis: Adrian Peterson, RB, Oklahoma -- The guy has rushed for over 100 yards in each of his first five collegiate games and went for over two bills last week against OU's biggest rival. Not only the Midseason MVP but the Heisman leader by a slight margin over Kyle Orton.

Trev Alberts: Adrian Peterson, RB, Oklahoma -- His running presence has made the difference for an Oklahoma offense that was somewhat one-dimensional in recent years.

I noticed, the older experts, picked Orton or Leinart. The younger experts, AD.

During halftime of Louisville vs. Miami, AD was discussed. His chances winning the Heisman. Right now, he is the best player in the land, both Trev Alberts and Mark May agreed. If he keeps it going the whole season, he deserves the Heisman. And if a voter says, he's not a senior, I won't vote for him, Mark May says, take away that guy's right to vote.

Adrian Peterson is The Sporting News Player of the Week. 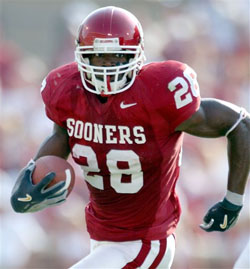 In just his fifth college game, Adrian Peterson ran for 225 yards helping the Sooners grind out a 12-0 victory over No. 5 Texas and stretch their winning streak in the storied rivalry to five straight. Before a crowd of 79,587, the biggest in the series' 99-game history, Peterson showed he was going to be a force from his second carry, a 44-yard burst. Although he never reached the end zone, his 32 carries went a long way toward setting up all three Oklahoma scores.

Can Adrian Peterson win the Heisman? I think so, remember 1999? Michael Vick, a freshman came in 3rd in the voting? And he didn't come on strong till the end of the season. If OU wins out, and they will, I think AD can win the Heisman trophy.