Adrian Peterson has NFC rushing title, playoffs in his grasp
"Is it frustrating? A little bit at times," Peterson allowed. "You know what it's going to be. I can't remember the last time I saw a seven-man front. Emmitt Smith told me to learn how to run against eight- and nine-man fronts. That's something that I'm really going to focus on.

Adrian Peterson is the clear choice for Star Tribune 2007 Sportsperson of the Year
Audio Slide Show: Slide show: It's all about Adrian

JAN. 1 In one of the zaniest bowl games ever, Peterson's Oklahoma team loses to Boise State 43-42 in double overtime at the Fiesta Bowl. The teams combine for 22 points in the final 86 seconds of regulation, and Boise State wins on a trick-play two-point conversion. Peterson has 77 yards and two touchdowns on 20 carries, including a 25-yard TD run on the Sooners' only offensive play of OT.

JAN. 15 Peterson, a junior, declares himself eligible for the NFL draft.

FEB. 25 Peterson works out at the NFL combine in Indianapolis despite learning that his stepbrother had been shot and killed the night before in Houston. Despite his excellent workout, NFL teams are wary of the lingering effects of a broken right collarbone that sidelined him for much of the college season.

APRIL 28 The Vikings, with the seventh overall pick in the draft, choose Peterson, despite having Chester Taylor, a 1,200-yard rusher, as their starting tailback.

APRIL 29 Peterson and his parents meet with the media in Minnesota and he is cleared physically to play in the team's minicamps. "By the time the season starts, everything will be perfectly fine," Peterson says.

MAY 4 Peterson makes it through his first minicamp practice unscathed. Physical exams show that he will not need surgery -- which would have sidelined him for six months -- on the collarbone.

AUG. 11 Peterson carries 11 times for 33 yards in the Vikings' preseason opener. "I definitely have got to adjust to the speed and those gaps," he says.

AUG. 17 Peterson breaks loose for a 42-yard run against the Jets, showing the first flash of what will come to be fairly common during the regular season.

SEPT. 9 Peterson scores on a 60-yard swing pass and rushes for 103 yards as the Vikings open the season by beating Atlanta. Taylor is injured, moving Peterson into a starting role.

SEPT. 23 The Vikings lose at Kansas City 13-10 and Peterson is not on the field for the final drive, causing a controversy about his underuse. Peterson, however, is publicly supportive of the way the Vikings use him.

OCT. 14 Peterson sets a Vikings record by rushing for 224 yards in a victory over the Bears.

NOV. 4 Peterson sets an NFL record by rushing for 296 yards in a victory over the Chargers.

NOV. 11 Peterson tears a ligament in his right knee as the Vikings lose to Green Bay. He is sidelined for two weeks.

DEC. 2 Peterson returns to play against the Lions, rushing for 116 yards.

Adrian Peterson had just nine carries for 27 yards in Sunday's loss to Washington. He also added two receptions for 21 yards. Rotoworld writes, "Washington brought eight and nine men into the box and dared Minnesota to throw and Tarvaris Jackson and the offense could not respond. Peterson was bottled up early as a result and then the Vikings had to pass when behind later on. It's worrisome that Peterson has been shut down two of the last three weeks with opposing defenses going all out to stop the run."

Adrian Peterson's statistics might suggest he's under the same pressure, but the Pro Bowl running back insists he's feeling no such thing.

With Minnesota's passing attack lagging again, largely because of mistakes by quarterback Tarvaris Jackson, defenses have been stacking up to stop the Minnesota run.

Peterson broke out with a strong fourth quarter in last Monday's comeback win over the Bears, but he gained only three yards on 14 carries the week before that against the 49ers.

Then came last night's game against the Redskins. Peterson is still the NFC's leading rusher by a slim margin, after managing just 27 yards on nine attempts

Peterson follows in Texas-size steps of a childhood idol 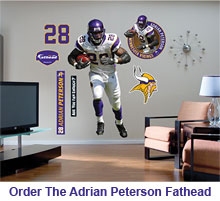 Adrian Peterson to take teammates to Hawaii for the Pro Bowl

Adrian Peterson is named starting running back for the NFC for the Pro Bowl!

Complex.com: What do you think of the Purple Jesus nickname?
Adrian Peterson: It’s crazy and kind of scary for people to compare me to Jesus. Nobody will ever compare to Jesus and it makes me feel good that people are recognizing talent.

C: You’ve been compared to Eric Dickerson, who did you idolize coming up?
Adrian Peterson: Being from Texas, I liked Emmitt Smith, Eddie George, Terrell Davis, those are the guys I really watched growing up.

C: How does it feel to be the fantasy football sleeper of the year?
Adrian Peterson: It feels good. I came in knowing what I can bring to the game, and I’ve stayed on track. I’ve been able to do some amazing things this year. I knew that believing in myself, making the transition and doing what I thought I could do, would sooner or later show people that I’m a ballplayer.

C: Do you think you deserve a cut of all those self-made fantasy GM’s winnings?
Adrian Peterson: (laughs) You know what? That’d be nice.

C: Going into the season you had high expectations for yourself, did you ever think you would perform this well?
Adrian Peterson: Yeah, you know being drafted by the Minnesota Vikings, I came in with a great offensive line, with Bryant McKinnie, and Matt Birk. Without the guys I had in front of me, it wouldn’t have been possible to break any type of record.

C: Was it ironic to break the record running against a team with one of the games best RB’s ever?
Adrian Peterson: It was. Not only that, it was one of the best defenses I’ve seen in a long time. Shawne Merriman and the Chargers defense have some real ball players on it, so it felt good. I have to give credit to my offense line; those are the guys that really made it happen for me.

C: What’s in your pre-game music rotation?
Adrian Peterson: I got Lil Wayne, some Jeezy, and I play some Kanye West songs from time to time. Maybe some Cassidy, I tend to mix it up.

C: You’ve been through more than most people growing up, how does that transform into motivation for you?
Adrian Peterson: I never stop encouraging myself. Realizing that I didn’t come from a lot, and growing up I had some trouble and really got into different situations that, I recognized God is really the only one who could get me through them. Once I recognized that it really helped me stay focused and keep my eye on my dream.

C: How was it when your dad got to watch you play after he was released from prison?
Adrian Peterson: It was amazing. It felt good. He was out of my life for nine years, he didn’t get to see me play since I was in little league, and then when he got out I was playing in college. It was definitely an experience that I had been waiting for.

C: What year-end accolades are you looking forward to, maybe rookie of the year?
Adrian Peterson: Rookie of the year would be great, going up there for myself, but definitely making it to the playoffs as a team is something that would mean a lot to me as well.

C: So what nickname does better with the ladies Purple Jesus, or your old alias “All Day?”
Adrian Peterson: All Day… and All Night! Make sure you add that last part on

Link to the interview