Adrian Peterson fan site, news, and links about AD Disclaimer: This is a noncommercial fan site. He will always be a Sooner.

Adrian Peterson: “I’d still like to stay in Detroit”

In Weeks 12-13 of his 14th #NFL season, @Lions RB @AdrianPeterson rushed for multiple TDs in consecutive games for the first time of his career.

At 35 years & 260 days, he becomes the oldest player in #NFL history to ever rush for multiple TDs in consecutive games.#OnePride pic.twitter.com/DWXskwV4SZ 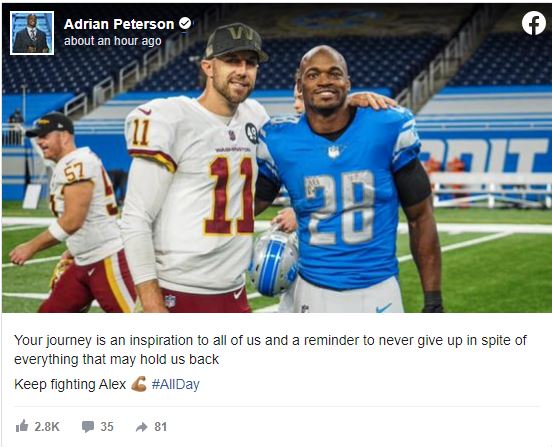 November 4, 2007: Vikings’ rookie @AdrianPeterson gets 296 rushing yards on 30 carries along w/ three TDs during a 35-17 win over the Chargers. The 296 rushing yards is a NFL single-game record that still stands today. pic.twitter.com/XgYZIvMKmg

Adrian Peterson's still got it. #OnePride

Adrian Peterson is one of maybe two players (Herschel Walker) who could have gone straight to the NFL from high school. Incredible career continues at age 35 in Detroit.

Compensation update I: New Lions’ RB Adrian Peterson is signing a one-year, $1,050,000 deal, plus incentives with Detroit, per league source.

What to know from Washington’s Sunday practice: Adrian Peterson eyes five more years in the NFL

Y’all make this game what it is!! Gets my blood flowing seeing this childhood game of ours bringing everyone together

All too often, we men find it easier to criticize each other, instead of building each other up. With all the negativity going around let's do something positive!! ✊🏻✊🏼✊🏽✊🏾✊🏿#everybody pic.twitter.com/WIKfTW971k

"Only one running back won MVP honors in the decade and that was Peterson in 2012."


If we didn't know who Adrian Peterson was, we'd watch the Redskins and say their RB looks like a superstar.

I enjoyed seeing these young men go to work at the Oklahoma All Day Camp.

We want to teach the kids at our camp hardwork, dedication, & perseverance. The “All Day” way! 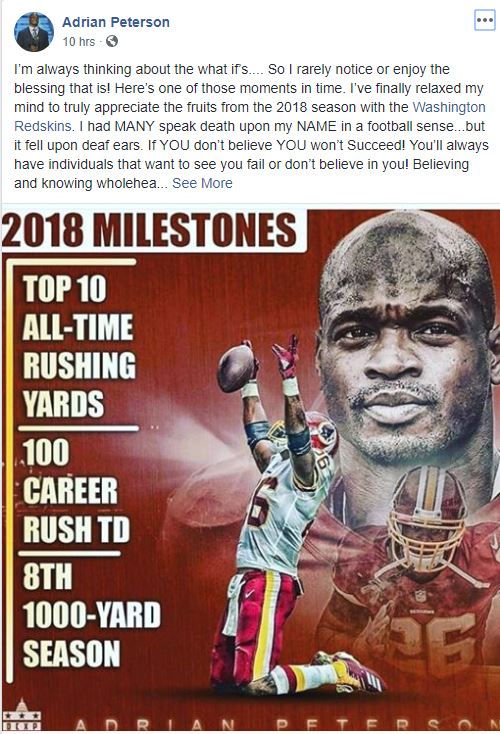 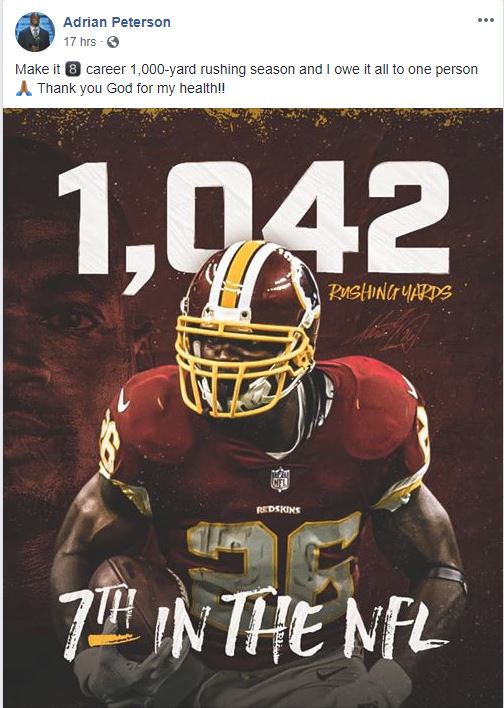 Awesome moment as @saquon got to meet one of his heroes this week. 🙌 @AdrianPeterson pic.twitter.com/23CXsg1PEU

Adrian Peterson has a special handshake ready for Cris Carter

1️⃣st for the @Redskins, 💯 for his career. @AdrianPeterson #OUDNA pic.twitter.com/I4y9Ft0kdK

Adrian Peterson 11 carries last night for 56 yards. Great to see AD out there again. Peterson carried the ball seven consecutive plays on one possession, and the 2012 MVP later picked up 15 yards on fourth-and-1.  Read More 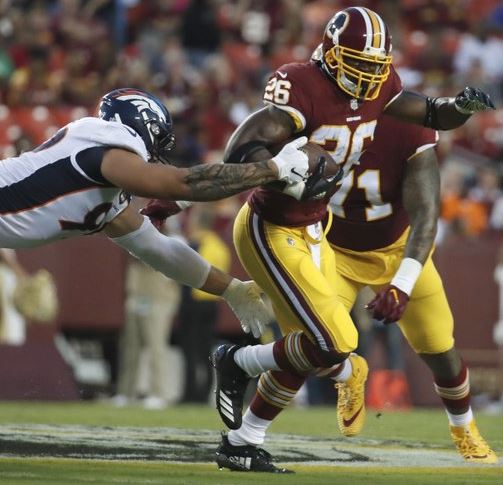 Everything happens for a reason. Wait on God and trust in him. He wants the best for us! He wants to take us from glory to glory, and from victory to victory. #faith #believe #redskins #allday pic.twitter.com/cZmzWoorLj

Visit will be tomorrow. Peterson is apparently in very good shape. Interesting visit for Washington after they brought in a few backs today. https://t.co/YB7J1iFcTm

Adrian Peterson: Doubt motivates me, even my own https://t.co/8oBikI4i49 pic.twitter.com/9NLic3KWaF 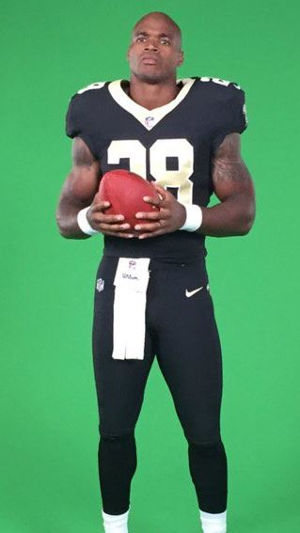 .@AdrianPeterson in the black and gold! #Saints pic.twitter.com/XkOXkvxnBJ

Adrian Peterson’s Chance for One Last Big Run  via @Andy_Benoit

Adrian Peterson: 'I knew what I was getting myself into' in Saints backfield that spreads ball around to multiple backs. Comfortable with it

AP didn't play much last yr but wasn't great when he did. BUT-NO ranked 6th in avg yds per carry BEFORE 1st contact in 2016. MIN ranked 30th

Adrian Peterson's statement to Josina Anderson on joining the Saints

And so Adrian Peterson is a Saint.

Source: Adrian Peterson’s visit to New Orleans yesterday did not involve a workout, like it did in New England

If Adrian Peterson is visiting the Patriots, he's reset his financial expectations. They pay running backs like they pay longsnappers.

Job 8:7 Your beginnings will seem humble, so prosperous will your future be. My mindset pic.twitter.com/YPJdRycu92

Vikings RB Adrian Peterson is out for Week 17. Career in Minnesota could be done.

"As you know, Adrian Peterson is out this week. A Vikings source tells me it's very likely Peterson won't play next week either. It's possible we've seen Peterson in purple for the last time." via Bob Holtzman, ESPN

Adrian told me the timeline doctors gave him was four to six months. Surgery was Sept. 22. So he's always been pushing it. That's him.

Adrian Peterson set for surgery tomorrow, may miss 3-4 months Tuesday Links: Peterson disappoints / What, if anything, can we read into Adrian Peterson’s slow start? Game 1 vs Titans, 19 carries, 31 yards, ouch. Update Adrian Peterson stats page. NFL star @AdrianPeterson and Olympic gold medalist @Carl_Lewis will serve as #TexasKickoff honorary captains! 📰 http://Bit.ly/ATKHonCap Peterson Is Football’s Best Pure Runner via @Andy_Benoit 8/5/2016Andy writes "Adrian Peterson is still the best pure runner in football. True, far too many of his runs last season failed to get back to the line of scrimmage, but that’s what happens when you put a superstar running back behind three backup linemen and with a quarterback who doesn’t threaten the field vertically. What makes Peterson special is his violent downhill burst paired with explosive lateral agility. No player moves left and right in confined spaces with such balance and force." Mike Zimmer talks about Adrian Peterson 8/2/2016 LinkQ: You’re still a run-first team. A: Yeah. It’s going to go through Adrian (Peterson). That’s how it is. But we’re trying to be a little more diverse in some of the things we do. Q: How close is Adrian to practicing?A: He’s close. (The hamstring strain is) real slight. Real, real slight. He can do a lot of things. It’s just I don’t want him full-go yet. He’s probably 95 percent or something like that. Q: Can he still handle the workload like he has at age 31? A: Oh, yeah. He’s 6% body fat. He’s a stud, man. And he works. And he’s excited about it. I think he’s excited about the changes we made on the offensive line, the new guys we brought in. Is Adrian Peterson still the number 1 running back in fantasy? PFF article 7/14/2016 Adrian Peterson says boring offseason could mean earlier retirement "That's it," Peterson told ESPN. "Training camp, going through the grind, OTAs and all that -- that will definitely be the deciding factor. Physically, body-wise, I'll be good. It's just mentally -- like with OTAs, I'm out there practicing, I'm going, I'm putting in work. But it's so repetitive that it's more suited toward the young guys and getting them into the system. It gets kind of boring." #TBT OU's Meet and Greet 2006 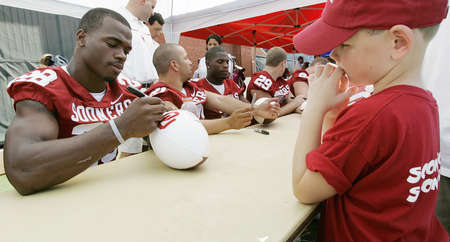 12/11/2015: Not all RBs embracing NFL's shift away from power run game 12/3/2015: Video: Mike Silver discusses Seahawks vs Vikings, and Adrian Peterson 11/30/2015: Adrian Peterson passes three to reach 18th on rushing list Adrian Peterson a bulldog against NFL's top run defense. The Vikings star busted past eight-, nine- and 10-man fronts. WHY ADRIAN PETERSON IS CARRYING THE VIKINGS’ OFFENSE—AGAIN via Pro Football Focus' Sam Monson 11/16/2015: The Vikings are in first place in the NFC North! AD with 203 yards rushing on the day, with a sweet 80 yard touchdown run to seal the game. Mike Silver wrote about AD on NFL.com today 11/9/2015: Adrian Peterson leads the NFL in rushing, again. 10/27/15: From the StarTribune: Adrian Peterson, explosive plays and negative plays: a deeper look 9/28/2015: Vikings 31, Chargers 14: Adrian Peterson says, 'Yeah, I think I'm back' Adrian Peterson leads the NFL in Rushing! Against the Chargers this week he gained 126 yards on 20 carries (6.3 YPC) as well as scoring his first two touchdowns of the season. He gained 109 of those 126 yards after contact and forced a ridiculous 10 missed tackles in those carries. Peterson has never been the most complete back in the world, and his receiving skills are more a case of being just good enough to get the ball in his hands and let him run again, but he added 58 receiving yards on a couple of receptions out of the backfield to finish the day with 184 yards from scrimmage. via PFF 9/17/2015: Adrian Peterson hits “reset button,” not worried about shotgun 7/21/2015: Peterson, Vikings agree to redo last 3 years of deal 6/13/15: Adrian Peterson moving past anger at Vikings, focused on football Vikings star running back thrilled by Adrian Peterson Day Saturday in native Palestine, Texas 6/2/15: Adrian Peterson is at VIking's OTA here's VIDEO 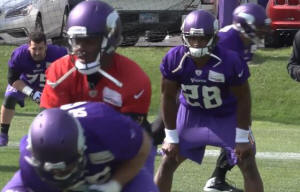 5/27/15: “He’s got two choices. He can play for us or not play,” Zimmer said, via Ben Goessling of ESPN.com 4/16/15: NFL reinstates Adrian Peterson from suspension 4/15/15: Adrian Peterson is eligible for reinstatement by the NFL today. 4/9/15: John Sullivan says Vikings players want Adrian Peterson back 4/8/15: MMBQ: The Lure of Peterson With Adrian Peterson nearing a return to the NFL, the next question is: Where will he play? The Cowboys and Cardinals are possibilities, but don’t expect either to act desperately. 3/21/15: Happy Birthday AD
3/02/15: Vikings have had 'open dialogue' with Peterson 2/25/15: NFL Trade Rumors: Could Minnesota Vikings Trade Adrian Peterson to Indianapolis Colts?
Looking for something? check our Archives I started this site September 2004, the best Adrian Peterson site on the net. Archives from Sept. 2004 to September 2014 there.